The same yesterday, today, and forever. 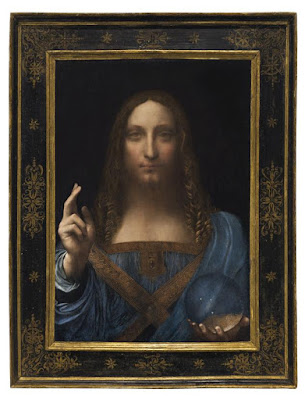 This morning I looked at the front of the newspaper, and saw Jesus staring back at me.  It was Leonardo da Vinci’s Salvator Mundi, a painting that had just sold at auction for over 450 million dollars, a new record for a work of art.
The article revealed that dealers had wagered the image of an enigmatic Christ dressed in a blue robe and holding a crystal orb could sell for far more [than its estimate] — given that da Vinci is a household name, fewer than 20 of his paintings survive, and this is the last one deemed by him in private hands.
It continued: The sale reflects the trophy-hunting atmosphere dominating the international art market lately… It helps that da Vinci is hailed as a hero of the Renaissance, a period in Europe when artists experimented with optical illusion and anatomical dissection to render their subjects lifelike and landscapes infinite.
In this work, da Vinci depicts Christ in flowing robes, his left hand cupping a crystal orb while his right is raised in blessing. The figure’s brown ringlets fall around his shoulders, framing a long face and dimpled chin.
Da Vinci painted the portrait around 1500, and it bounced among European royals for hundreds of years before shoddy cleaning efforts and overpainting rendered it almost unrecognizable.
The value of the painting lies clearly in its creator, a great artist and scholar, as well as in the rarity of his works.  But it is also fitting that the subject of the painting, rendered with the skill and mastery for which that artist is known, is the incarnate God.
How could da Vinci, who lived 1500 years after Christ, have depicted Him with any authenticity, skeptics might ask.  Isn’t this just a painting of a regular guy dressed up as Jesus?
God has made it possible to know Him by allowing us to know His Son.  That knowledge, even that intimacy, is available to us who are in the Church through her Scriptures and teachings, in the Sacraments and in all her works.  We are given the opportunity and ability not simply to know about Him, but truly to know Him.  Leonardo knew his Lord.
The Word took flesh and dwelt among us, and ever since, God has had a human face.  God took on our human nature, and in so doing revealed everything we have in common with Him; everything, that is, except sin.
One of the ways in which mankind resembles our Creator God is in our desire and our ability to create.  This aspect of human nature was at its peak in Leonardo da Vinci, artist and inventor.    Truth, beauty, and goodness were the subject and goal of his works, and as such echo the very creative work of God.  Mortal artists share in the creative work of the immortal Creator whenever they bring into being some new image or object that is unique and good.
Because God became man, whenever an artist depicts in his work some reality that is truly human, he reveals something that is also true of God.  Therefore, what makes this 500-year-old portrait beautiful, what makes it human, what makes it attractive, makes it also truly revelatory of Jesus, the Son of God.  He is the Savior of the World, before our very eyes.
It seems fitting as we contemplate the End of Days in this final week of the liturgical year, to be up-to-the-minute with the art world and the latest international news.  It is a gift of providence that commerce and journalism should conspire to present to a busy and even distracted modern society, this image of Jesus Christ, who is King of the Universe.  It gives us pause to give thanks to our heavenly Father, and to artists, who reveal in Jesus God’s breathtaking glory -- and our own.
Monsignor Smith
Posted by MsgrKBSmith at 9:00 AM

The second century; that’s one thousand, nine hundred years ago.  The years on our calendars this century begin with a “20”; that century, they began with “1”.  People who had heard and known the Apostles were still alive in the second century.  Many texts we treasure were newly written down, including the “Memoirs of the Apostles” as they then called the Gospels.  One of the texts that was treasured enough to be saved, though its author’s name is lost, was a homily, given doubtless at Mass in that early Church.  I found this excerpt in the Divine Office this week, and hope you will read it closely enough to see how the truth of Jesus Christ was expressed then, and how timely it sounds now.
“My name is constantly blasphemed by unbelievers,” says the Lord. “Woe to the man who causes my name to be blasphemed.”  Why is the Lord’s name blasphemed?  Because we say one thing and do another.  When they hear the words of God on our lips, unbelievers are amazed at their beauty and power, but when they see that those words have no effect in our lives, their admiration turns to scorn, and they dismiss such words as myths and fairy tales.
They listen, for example, when we tell them that God has said: “It is no credit to you if you love those who love you, but only if you love your enemies, and those who hate you.”  They are full of admiration at such extraordinary virtue, but when they observe that we not only fail to love people who hate us, but even those who love us, they laugh us to scorn, and the Name is blasphemed.
Therefore, brothers, if we do the will of God the Father, we shall be members of the first spiritual Church that was created before the sun and the moon; but if we fail to do the will of the Lord, we shall be among those to whom it is said in Scripture: “My house has been made into a robbers’ den.” We must choose then, if we want to be saved, to be members of the Church of life.
You surely cannot be ignorant of the fact that the living Church is the body of Christ; for Scripture says: God “made man male and female.”  Now the male signifies Christ, and the female signifies the Church, which, according to both the Old and the New Testament, is no recent creation, but has existed from the beginning.  At first the Church was purely spiritual, even as our Jesus was spiritual, but it appeared in the last days to save us.
For the spiritual Church was made manifest in the body of Christ, in order to show us that if we uphold its honor in the outward, visible form, and do not defile it, we shall, through the Holy Spirit be made its members in the true, spiritual sense.  For the body of the Church is a copy of the Spirit, and no one who defaces the copy can have any part in what the copy represents.  In other words, brothers, you must preserve the honor of the body in order to share in the Spirit. For if we say that the body is the Church and the Spirit is Christ, it follows that anyone who dishonors his body, dishonors the Church. Such a man will have no part in the Sprit, which is Christ.  But if the Holy Spirit is joined to it, this body can receive an immortal life that is wonderful beyond words, for the blessings God has made ready for his chosen ones surpass all human powers of description.
That sounds as fresh and timely as if it were written for this week’s bulletin.  Let the Church say, Amen!


Monsignor Smith
Posted by MsgrKBSmith at 9:00 AM

You know how I am about anniversaries.  Centenaries are even bigger, and we are in a four-year stretch of big ones.  We have been moving through World War I since August 2014, and we will conclude that on this weekend next year with the one-hundredth Armistice Day, now celebrated as Veterans’ Day.  This week, though, we observe something even worse, even more catastrophic, than that World War.
This week was the one hundredth anniversary of the bolshevik revolution, in which Lenin and his cohort brought communism to power and began a century of inhuman and anti-human oppression in the name of a Marxist ideal future.  Millions and millions and millions have died.
This murderous culture of lies began, of course, with a lie.  The “bolshevik revolution” was neither.  The word “bolshevik” is Russian for “majority;” Lenin and his thugs were a tiny minority with no allies and little support.  What they accomplished was not a revolution so much as an armed coup.  With a violent putsch, they toppled a weak provisional government erected in the wake of the abdication of the tsar, and taking control of the means of communication, notably the post office and telephone exchange, began their reign of lies.
What is bewildering to me is the number of otherwise intelligent people who think this grim history is the result of something other than the intrinsic reality of Marxism and communism, that somehow these ideas are laudable and even promising alternatives for mankind, if only they were not hijacked by “bad eggs” like Lenin and Stalin.  They think its analysis of humanity and society have insight and truth; they think the alternative it proposes bear some promise for human flourishing.    They think it could be done right, it could be done well.
But the relentless logic of this inhuman ideology subordinates human life and human beings to its own analysis, vision, and goals.   Asserting there is no such thing as human freedom, it grants none to those who fall under its sway.   Asserting that there is no God, it acknowledges no human dignity.  Subordinating all things to the goals of the state, truth and falsehood, good and evil become fungible.  And people die.
Therefore, even where there is no Lenin, or Stalin, communism gives us Mao Tse Tung, Ho Chi Minh, Pol Pot, Fidel and Raúl Castro, Daniel Ortega, Hugo Chávez, and Nicolás Maduro.  And many people die.
Ideology is a human invention more dangerous than any weapon or toxin.  Whether communism, or fascism, or any other social scheme or system devised to promise some paradise on earth, by whatever criteria such paradise be defined, ideology subordinates man, his dignity, and his freedom, to a rapacious lie.  And many, many people die.
Communist tyrant and madman Josef Stalin famously remarked, “How many divisions has the Pope?” If violent persecution is the compliment that Communism pays to the opponent it fears, then the Catholic Church has been and is now its most dreaded nemesis.  Unarmed except for the cross, she constantly undermines the power propped on lies by living and sharing the truth, Jesus Christ, Who is the answer to every human question, the source of all freedom.
It is no coincidence that also one hundred years ago, Our Lady appeared to three peasant children in a remote corner of Portugal and spoke of, among other things, the conversion of Russia.  She has given us the antivenin to the poison that courses through our world in many nations and publications, in government houses, guerilla camps, and faculty lounges.  She gave flesh to the Eternal Word, Jesus Christ, and showed us how to live the truth in love.  She reassures us that one day, when He is all in all, even this anniversary will have been transformed into a cause for celebration.


Monsignor Smith
Posted by MsgrKBSmith at 8:30 AM