I have two bits of very good news for you this week.
First of all, I am happy to let you know that we have another priest here in the parish: Father Joseph McCabe.  He is not a Parochial Vicar assigned here by the Cardinal, but another resident priest and student at Catholic University, like Father McDonnell.  Unlike Father McDonell, he is studying canon law, and is a Maryknoll missionary who has experience at many interesting things, including some that might sound familiar: pastor, secretary to a Cardinal, and official of the Vatican.
Like Father Nick and Father DeRosa, he is an escapee, um, I mean, native of Long Island.  How this Alabama boy winds up with all these New Yorkers is beyond me.  But I do know how Father McCabe found his way to living here.  We had met one another in the past, but only when he was looking for residence in Washington did several of our mutual acquaintances suggest that he contact me.  The Universal Church is a small world some days.
You know I get self conscious about not providing enough variety to you.  I worry that to get me and the Birmingham Buzzsaw coming at you every time you come to church can diminish not only the appeal, but also the effectiveness of my words and work.  So I am delighted to have someone else on board to provide you with some variety, definitely in voice as well as in experience and approach.  But you will be as pleased as I am that what he offers and preaches is the same: Jesus Christ, and Him crucified.  See, I told you it was good news!  But wait – there’s more.
Two days ago I received the final update for last year’s Cardinal’s Appeal.  Our parish not only met, but also exceeded the goal set for us by the Archdiocese.  We contributed $151,411.02, which was 106.12% of our goal.  Woohoo!  We had pledged $166,266.08, so there was almost $15,000 in “slippage” between intention and achievement.  Bear this in mind this year when I tell you our pledges have matched the goal – we will still need almost ten percent more!
It was the most successful Appeal ever for the Archdiocese, raising $13,866,654.00.  That is more than $1.3 million above the stated goal for the Appeal, and almost $200,000 more than was raised in 2011.  Oddly enough, the number of contributors this year was down by 2,159, to 41,569 households.  So fewer people are providing more support to these vital charitable undertakings of our Archdiocese.  Matching the trend in the Archdiocese, in our parish, 451 households contributed this year, down from 455 the previous year, and 473 in 2010.  So a smaller core of Saint Bernadette parishioners is doing more for the needs of people in the Archdiocese – which news has both good and sad sides to it.
I am not at all sure of what Cardinal Wuerl thinks of first when he sees me or any other pastor of the Archdiocese, but I know that he follows participation in the Appeal closely, and for good reason.  With this week’s report, I know I can continue to be quite proud to represent the people of Saint Bernadette to him or anyone else in the Archdiocese, on this and every other count.  You all are great, and I am glad you show it in this way, as well as all the others that I see, even if the Cardinal does not.
Not that I think His Eminence misses much, if anything.  But if I had a chance to walk him about the property, there are many, many more good things I would show him in this splendid, faithful parish, and many, many good people who make it so.  Thank you for letting me know you and your fidelity.  God bless and keep you.
Monsignor Smith
Posted by MsgrKBSmith at 1:00 PM

My car is coming up on 45,000 miles.  The initial warranties and the maintenance agreement that I purchased when it was new are about to expire.  Within the next month or so, I will leave it at the service center for scheduled maintenance, as well as a thorough check.  I more than suspect I need new brake pads.
This weekend we celebrate the Baptism of the Lord, which brings to a close the Christmas season and opens up onto the life and public mission of Jesus Chris.
The Second Vatican Council fifty years ago re-emphasized that Baptism is the foundation of every Christian’s identity before God and among men, and confers Divine and eternal life on all who receive it.  This sublime identity and this great power are not to be neglected, but by uniting every one of the Baptized into the one People of God, makes them sharers in the mission of the Church, and as members of the Body of Christ, gives them great power to reconcile all things in Christ.  The hope was that the faithful baptized would see that they not passengers on the ship of salvation, but rather the skilled sailors and crew.  The well being of the ship, and the possibility of reaching her heavenly destination, depends upon their care and work, not simply that of the captain.
Our current liturgical calendar, as revised after the Council, gives us today’s feast in order emphasize our own Baptism.  In reflecting upon what God has done during Jesus’ Baptism, we understand that in our Baptism, God has made us His children and heirs.   In responding to the admonition the Listen to Him, we hear His commandment to Love one another as I have loved you, which we can fulfill only because of our Baptism into His life.
We associate Baptism with children – infants even.  It is a time for cake that is sweet and gifts that are sweeter.  Family comes from all over to witness and participate, posing for pictures and enjoying the party.  Is your Baptism still in an album somewhere, or has it grown into adulthood with you?
I am not asking whether you can find your certificate or your candle, much less whether you would fit into you gown.  I am asking whether by your behavior you demonstrate that you have received Baptism; whether you grasp Christ as your one true light, and you wear your washed and whitened soul as your most precious garment.  In what condition is your own Baptism today?
Have you continued to learn about the Faith, or are you relying on the last class you took, in high school, or eighth grade?  We need to continue to read and learn.  A great resource for this would be the video series Catholicism from Father Robert Barron and the Word on Fire Institute.  Do your nourish your faith with reflection on the Word of God in Scripture, through private study and careful attention during liturgies, and with the very Body and Blood of the Lord in the Eucharist?  Our engine will gum up something fierce without the frequent oil and filter changes of sacramental Penance to remove the gunk called sin from our system.  Our brakes will fail to save us from disaster unless we recondition them by fasting and abstinence.
I have to maintain my car because if I do not, it will cease to function.  Our Baptism is much the same way.  Both the years and the miles can wear down the power of our Baptism.  But He who sanctified the waters is the One who makes all things new.  That will include us -- so long as we give our Baptism His suggested maintenance.
Monsignor Smith
Posted by MsgrKBSmith at 2:00 PM

Credit where credit's due

We don’t give the Three Kings enough credit.  Wise Men or Magi, whatever we call them, I think that we do not think about them enough.  At best they get one Christmas song, “We Three Kings,” and everybody is delighted to see the kids chosen to represent them in the Christmas pageant decked out in their exotic finery.  As much fun as that is, it still falls short. 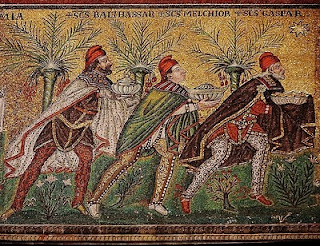 So, when I saw that the bulletin company had this image available for our cover, I jumped at the chance to use it.  This splendid mosaic reveals the Three Kings as individuals with some identity, even if their faces and expressions are stylized and nearly identical.  That is simply an element of the iconographic style of the time.
This mosaic was created in the middle of the sixth century (that is, the 500’s AD) in a church in Ravenna, at town on Italy’s east coast that was a major naval base for the Roman empire during the centuries of its decline and destruction.  Because Ravenna was of major importance –with even the Emperor himself living there for several long periods – there were people and resources to construct and decorate amazing churches that revealed the very best art and materials the time had to offer.  But because Ravenna reverted to being a sleepy backwater almost instantaneously when Roman naval power ceased, those same churches remained intact, un-defaced by marauding enemies, and un-modified by well-intentioned but tasteless “friends” who would inflict later ecclesiastical art styles (cf, the Baroque or the post-modern).  And so we see the Three Kings in the beautiful style of the sixth century.
The Kings lead a long procession of figures in mosaic along the left side of the nave, who are white-robed virgins bearing crowns as well as the lighted torches that mark them as the wise virgins associated with Christ’s parable in the Gospel.  This process is coming before the enthroned Virgin, who holds the child Christ and is flanked by four angels.  These are the ones who recognize what is revealed in the Epiphany that we celebrate today, that Christ is the King who is to come, the Son of God, and Lord of all the nations.  They see and respond to what shines forth in Christ, when so many others, blinded by their own expectations, fail to do so.  Maybe that’s why all of them, men and women, receive the title “wise.”
The mosaic also acknowledges their traditional names – Caspar, Melchior, and Balthasar – which helps us to understand that these three were indeed individuals with lives and identities before and after their interaction with the Christ child.  And this is where I think we can see that we usually do not give them enough credit.
The song says well enough one of the main things we know about the Three King:  they came “from afar.”  They had their local Gods and worship, and had their own wisdom and learning.  This did not prepare them for Christ’s coming in the same way that God prepared the people of Israel through His covenant, and the law, the prophets, and writings.  Nonetheless, in their wisdom, they recognized and responded.
The Three Kings then in my mind are the precursors of all the people who are deprived of a family or culture that prepares them for Christ, but nonetheless yearn for Him without having learned of Him.  How then, will they find the wisdom that will lead them to what He alone can offer them?
When we fail to announce Christ Jesus as not merely our personal “choice” as God and Lord, but indeed the only God and Savior, we deprive others people of the opportunity to come to Him and receive what He and He alone can give, which is divine life, and forgiveness of sins.  In failing to give people the opportunity to move toward Christ and salvation, even if they must come “from afar.”  We fail to participate in His Epiphany when we do not give Christ enough credit as the Savior of all nations, and when we do not give all people credit for being wise enough to recognize and receive Him.
Monsignor Smith
Posted by MsgrKBSmith at 2:00 PM